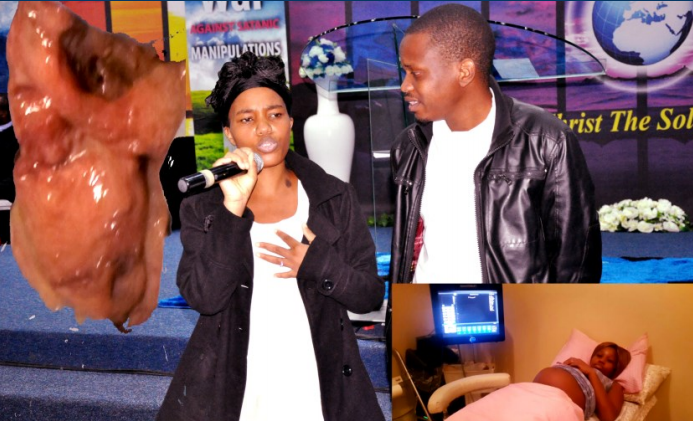 I’m standing here today awestruck by what God has done for me it is beyond
what words can describe. I developed fibroids 4 years ago and the doctors and gynecologists labeled my womb useless, they said I had no chance of
conception at all.
The doctors operated me and removed the fibroid however, shortly after the surgery was performed it grew back again This fibroid was not just the usual fibroid that many know it to be. This fibroid kept me in and out of
hospital. It was horrible. Specialists from South Africa, Zimbabwe and China did not know what to do. The doctors put a very rare machine inside me, that is only available at the specific hospital in the entire Africa, but even after that there was no solution.
My stomach kept growing big and I looked 7 months pregnant. This abnormal stomach growth made people ask me when my delivery date was
and this struck pain in my heart because the doctors had labeled me barren. The fibroid produced a very horrible smell, people constantly moved away from me just to avoid the horrible odour. Before I came to Rock of Victory Ministries Int’l, I thought of removing my womb because the pain was just too much to bare .
When we came to Rock Of Victory I received prayers from Reverend
Francis O. Anosike and that was the turning point of my story. The very same night after the prayers I frequently went to the toilet and I felt heat in my stomach. To my greatest surprise, I DELIVERED THE FIBROID
as if I was delivering a baby.
Ever since that fateful occurrence, my stomach has gone flat, the odour has
disappeared and the doctors are short of words. Only God can do such, I give
Him all the glory. He healed me miraculously without me having to go for
surgery.
Gynecologists cannot find a single trace of fibroids and they said my
womb is as good as new. Glory to God Almighty, We are forever grateful to
God for what he has done.
God has not only healed me but he has restored joy in my marriage. He is the God of restoration, all the money I spent going from one gynecologist and
specialist to another has been restored Our business is doing very well and we
are prospering financially. All the praise be to God.

Saved from the Jaws of Hell

I FACED DEATH AND LIVED TO TELL THE TALE…